You're A Mean One Mr. Grinch - Coming Thanksgiving Day 2016! 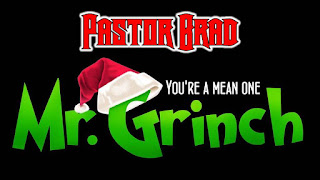 You’re A Mean One Mr. Grinch is the epitome of CLASSIC Christmas! I grew up loving the Dr. Seuss film, “How The Grinch Stole Christmas” and this song was a focal track all the way through! The lyrics for the original performance were written by Theodor, “Dr. Seuss” Geisel. The music was composed by Albert Hague. And the original recording featured an unforgettable performance by Thurl Ravenscroft—well known as the voice of “Tony The Tiger!”

GAME OVER - Instrumental Metal with a melodic punch!

Here's a little jam to rock you though that day/night.  BIG thanks to Jon Hooper--who just amokes on this track!--He and I sort of trade licks back an forth on this one. ... A little behind the scenes secret--this song was inspired by the theme song to a "Spy Kids" movie---I think it was part three... I was watching it with my kids... heard the theme song... got inspired... run upstairs to my studio and recorded the ideal that became this song :-) Enjoy!

Today, Oct. 21st is my 50th Birthday.  Wow, surreal... special...  Reflecting on all that I have to be so very thankful for today--friends, family, health, work... so much.  But, honestly--the ONE THING I am most thankful for today--the ONE THING that honestly covers all of the others is GOD'S FAITHFULNESS.  He is so good.  Every good and perfect gift in my life (including mylife) is a gift from Him.  Thank you Lord!  This song is all about that faithfulness, enjoy!

The PB Rocks 80s Christian Rock / Metal Music Podcast is a colossal serving of 80s style Jesus-honoring melodic metal music, bible teaching and edification for your walk with Christ! In this episode, I share FOUR more tracks from my 2004 release, “Out Of The Hellhole” – Sound The Alarm, Saga, City Streets & Crazy—Each of these songs delivers a musical punch & spiritual message guaranteed to Rock You Up! Oh how we need to hear the alarm and awaken fully in Christ & fight the good fight of faith! We are in a battle and this song is a call to arms! Saga is a musical message of encouragement to hang tough with Jesus and to remember that in Christ we are victorious! City Streets is a redeemed song of rebellion. In its original form it was a garage-band anthem of revolt against authority—but after God’s Spirit took up residence in my heart and filled me with an attitude of joy and peace in Him—this song was re-envisioned as an metal hymn proclaiming Christ’s call to every believer to shine for Him loud and proud in the world! And finally, CRAZY is another song from my garage-band days that was originally about sticking it to “the man” – but under the influence of the Holy Spirit it blossomed into a song celebrating God’s good gift of hard-rock music to the world!  Enjoy!

A Lighter Shade of Melancholy

A Lighter Shade of Melancholy is a cut from my 2006 release - "RESHREDDED". This is an 80s influenced-hard-rock instrumental shred guitar song that mixes acoustic guitar with shred metal tones! I’m especially blessed by this song because it contains a guest appearance by one of my guitar heros—Dee Harrington of the Christian metal band, SAINT. He laid an amazing track on the second half of this song—thanks Dee! Enjoy!

THE WAY -- Track 5 from Out Of The Hellhole

The Way is track 5 on my 2004 release, “Out Of The Hellhole” – Friend==THE WAY isn’t a three-point plan. It’s not a self-help-philosophy. It’s a person, JESUS. You might remeber that 80s Christian Metal legends, Stryper also wrote a song about this, also titled, THE WAY! This is a fundamental reality within Christianity--it positions and presents Christianity as a RELATIONSHIP with a Living Savior and totally differentiates Christianity from mere religion.

In the gospel of John, Jesus is talking to his disciples and he shares this truth with them, saying, “Do not let your hearts be troubled. You believe in God; believe also in me. 2 My Father’s house has many rooms; if that were not so, would I have told you that I am going there to prepare a place for you?3 And if I go and prepare a place for you, I will come back and take you to be with me that you also may be where I am. 4 You know the way to the place where I am going.” 5 Thomas said to him, “Lord, we don’t know where you are going, so how can we know the way?” 6 Jesus answered, “I am the way and the truth and the life. No one comes to the Father except through me” (John 14:1-6).

In this 80s style Christian Metal anthem I proclaim loud and proud that when you place your trust in Jesus—you have found THE WAY…. You’ve discovered the TRUTH and you have been filled with real, eternal, abundant, LIFE---and its name is JESUS. No wonder the Bible says, “Christ in you, the hope of glory” (Col. 1:27). I was blessed to be able to perform THE WAY at the Cornerstone Christian Music Festival in 2009, on the Sanctuary Stage. This video contains some brief clips from that performance. Thanks so much for reading and watching!